THIS POST IS FOR ALL OUR KHAMBU RAI WHO STILL HAVE A MISCONCEPTION THAT THE THREE HEARTH STONE REPRESENTS BRAHMA VISHNU N MAHESH. 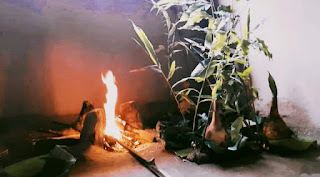 PLEASE UNDERSTAND THESE THREE ARE HINDU GODS WHO HAVE NOTHING TO DO WITH OUR KIRAT HISTORY OR RITUALS. WE ARE NOT HINDUS !!!

For the purpose of simplification let us call the three main stones (lungs):

Outside the 3 stones (lungs), a 360 degree perimeter is created by placing 4 flat stones in all directions. These stones are placed such that each stone creates a further 90 degree angle. A flat stone is placed at the bottom of the three main lungs. This stone remains invisible since it is placed underground. The Stones in our Sanctum/Hearth provide a geometrical axiom that gives it balance and equilibrium to harness spiritual energies. The outer perimeter is known as the Saanglaakhepbu while the flat stone underneath is known as Thechelung. Thechelung remains warm even after the fire is extinguished thereby keeping the hearth and the home warm. The energies produced during the Pitri worship remains intact because Thechelung remains warm and still, long after the ritual ends.

The combination of the element of Fire and the Geometrical Shape of the Stones is both creative and destructive, its qualities are brightness, thinness and motion and its mode is active. It is fire that our ancestors used to warm their homes and we use it to cook our food, we sit around it to ward off the darkness of night. 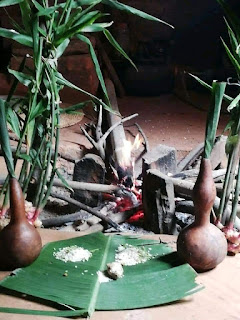 During the ritual of Pitri worship/Mang Sewa, the fire becomes a witness to the Oral Voyage (Mundhum) one takes to protect life from the adversity of negative entities that could emerge. It is believed that during the ritual the entire universe is opened and the house forms an orderly medium and gap inhabited by human beings to now be ready for the ancestors to arrive. It is transformed into a space into which the ancestors are fleetingly transferred where negative entities wandering about the village may penetrate but thanks to Ramilung, they cannot enter the house.

Within the realm of the divine connection between man and his ancestors, the man seeks to identify and demarcate a space for himself and his family members. It is at this moment that the ideal borders of the village do not exist, nor even the walls of the house provide protection any longer. Only the four stones sides forming the outer perimeter of the sanctum/hearth can now be a place of refuge, in a world that has become entirely a vacant space; belonging to everyone and no one.

Also known as Biogeometry (the geometry of shapes), the shape of a Khambu Hearth/Sanctum/Samkhalung helps unlock the energies of the spiritual realm. They are the medium between the spirit world and the human world; the foundation of the all creations- in life and in death.

Popular posts from this blog